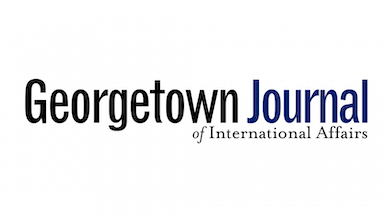 The Georgetown Journal of International Affairs (GJIA) is the flagship academic publication of the Edmund A. Walsh School of Foreign Service at Georgetown University. The Georgetown Journal of International Affairs informs the policy and academic debate on international affairs by giving voice to innovative ideas alongside analysis backed by practical and intellectual experience. The Journal goes beyond the headlines in identifying and discussing trends that will shape the world, pairing the foresight of students with the wisdom of accomplished thinkers. The Journal is a resource for scholars, business leaders, policy makers, and students of international relations alike, cultivating a dialogue accessible to those with all levels of knowledge about foreign affairs and international politics. The Journal publishes an annual peer-reviewed edition sold online, indexed in academic databases, and distributed in bookstores around the country. GJIA also publishes shorter pieces on our website on a rolling basis.
Visit Site